Diabetes certainly is not a dental disease. It is a problem of carbohydrate metabolism and pancreatic failure. However, this is a disease that is to a degree caused by periodontal disease and once it is establish Diabetes Mellitus can make the periodontal disease worse and harder to stabilize. Periodontal disease can cause or aggravate diabetes through the mechanism of inflammation. Periodontal disease causes chronic inflammation. Inflammation causes the release of cytokines, TNF, IL-1B, and prostaglandin E2. These inflammatory products cause the Islets of Langerhan in the pancreas to malfunction and produce less insulin. Once established, diabetes creates a hyperglycemic condition which interferes with the bodies ability to fight the periodontal infection and repair damage in periodontal tissue.  Simply stated, the problems go both ways. Diabetes makes periodontal diseases worse and harder to stabilize. And the products of chronic inflammation make the diabetes worse. Therefore this is a disease that has to be taken very seriously. We recommend that people with diabetes brush and floss three times a day and see their hygienist three times a year. 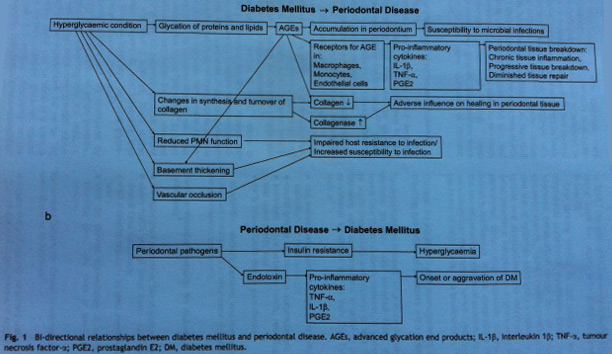 The eventual side effects of diabetes are absolutely terrible. First the starved heart muscle starts to fail and then every tissue and organ in the body is starved of oxygen as well as glucose and there is an eventual failure in all these tissues and organs. The results are: heart failure, atherosclerosis, 40% of all kidney problems, 50% of all limb amputations, blindness, non-alcoholic fatty liver disease, obesity, dementia, and of course worsened periodontal disease. 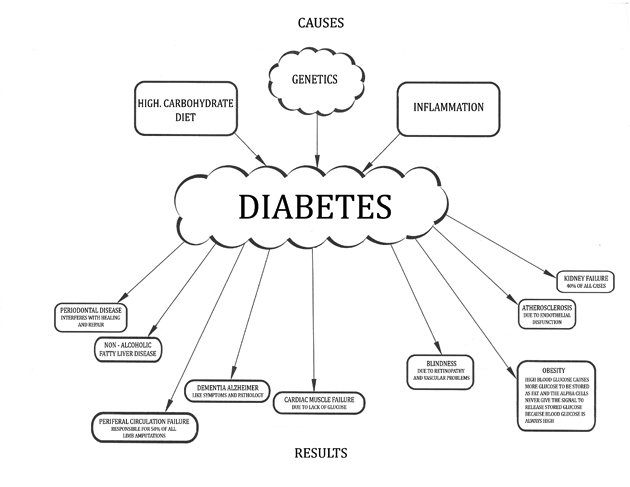 Conspiracy theorists believe that the whole diabetes/obesity epidemic is in fact the result of some well-intended social engineering by the American Heart Association which went horribly wrong. According to their theory, back in the 1970’s, the heart association attempted to make the world a healthier place by encouraging people to decrease the cholesterol in their diet. This meant less fats and less meat in the diet. Meats were replaced by more carbohydrates mainly in the form of healthy whole grains.

Sounds good except that the healthy whole grains, especially wheat products (Bread and pasta) break down into glucose (Pure sugar) very quickly. That is where the trouble starts according to the conspiracy theorists. Some support for this idea is seen in the fact that some low carb diets such as Atkins, Paleo, Bernstein and the 17 Day Diet do seem to work a bit faster than the ordinary low-fat and low calorie diets.